Role of Technology in Managing Water Supply and Consumption in India 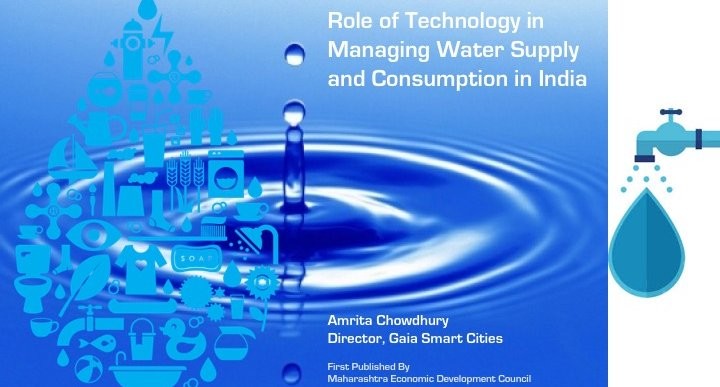 Water is a critical scarce resource in India and will dwindle further as the population increases to 1.6 billion by 2050. Water related conflicts of 2016 may be prescient of a future where individuals, businesses, cities and states struggle over limited supplies. Assocham estimates that the riots in Bengaluru over Cauvery waters led to INR 25,000 Crores in losses to the state of Karnataka. The way forward might be for city and state administrators to actively manage water supply and reduce loss and leakage. Technology enabled smart metering could be the game changer.


India has one of the lowest per capita availability of water in the world, and that availability is set to decrease further as its population increases. Despite its wet and warm climate and extensive river system, ground level water retention is low across the country. Much of the rainwater flows into the rivers, and a large fraction of river water is unusable due to inaccessibility. Central Water Commission data suggests that only a third of the water potential of the river system is usable.


An analysis paper published in the Journal of Earth Science System in 2008 posited that ground water availability was even lower than estimated by policy makers. Research conducted subsequently by Indian Institute of Science (IISc) and Indian Space Research Organization (ISRO) verified this position and further found that loss of water through evapotranspiration equaled or exceeded its replenishment through annual rainfall in the northern states and the Indo-Gangetic plains. A McKinsey report published in 2009 suggested that India will only be able to meet half of its water requirements by 2050. 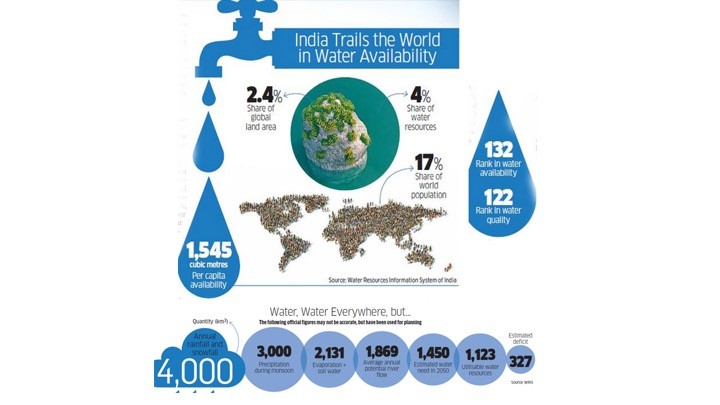 While there is greater media focus on monsoonal rains, which influence short term cropping patterns and efficiencies, there are several other factors influencing long term availability of ground and surface water. 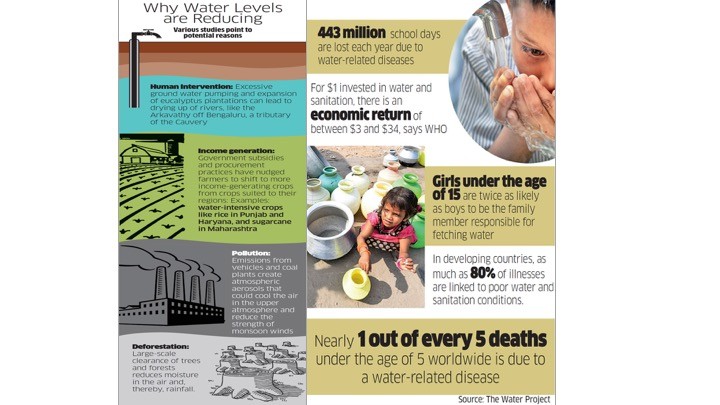 Rapid urbanization and poor regulatory norms have led to excessive pumping of ground water. Gurgaon is held up as case in point, but similar scenarios exist in high density, high rise, high end enclaves around the country. Large scale deforestation has led to reduction in moisture in the air and increase in ambient temperature, further increasing ambient water loss. Air quality pollution can influence the pattern of trade winds and monsoonal rains. Government subsidies and incentives have encouraged farmers to shift to water-intensive crops in water-deficit states, severely affecting the availability of water. This includes practices such as growing rice in Punjab or sugarcane in Maharashtra.

Water sharing agreements have been put in place globally to manage water flows across geographies and national boundaries. India shares its water from rivers that originate in neighboring states. But this situation is affected by geopolitical sensitivity and questions around water flow and quality data.

Furthermore, improper disposal of sewage, industrial waste and chemicals runoff from farms has contaminated India’s water systems and rivers, and reduced access to clean water for domestic, drinking and industrial usage. Lower availability of water has further downstream effect on quality of life indicators such as hygiene, sanitation, and prevalence of water borne diseases.


India’s water predicament is further influenced by its unique consumption patterns, leakage and loss patterns, wasteful consumption behaviors and regulatory policies that do not reflect the criticality of the challenge. India has traditionally focused on increasing water supply. However, Indian utilities lose roughly 40-60% of their water compared with 3.7% loss in Tokyo and 7% loss in Phnom Penh. Estimates from the Third World Center for Water Management indicate that less than 10% of wastewater generated in India is treated and recycled. 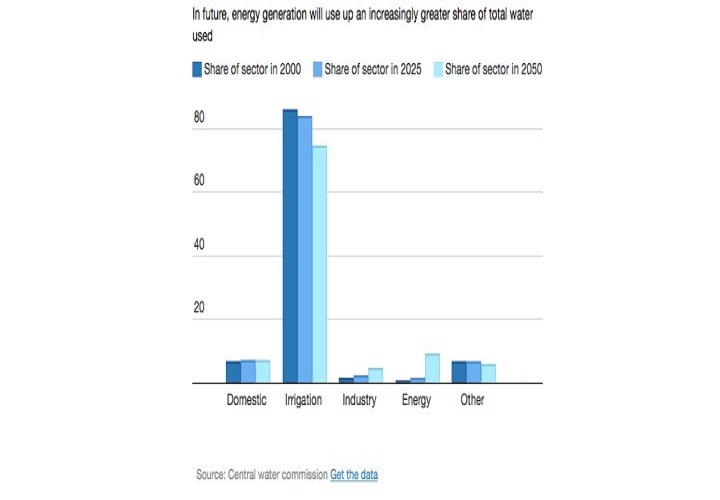 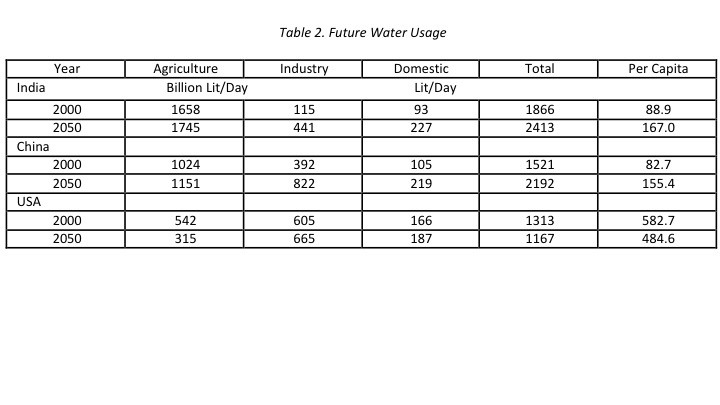 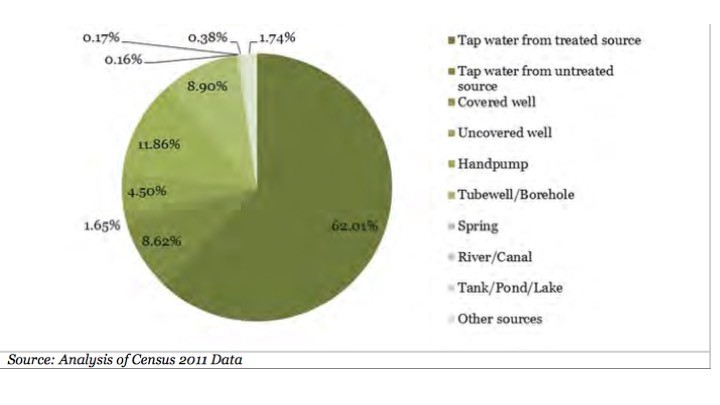 The predicted usage of water is set to increase across every sector, with disproportionate increase in industrial and domestic usage as urbanization happens and population and affordability increase. While the per capita consumption of water in the United States is projected to decrease by 2050, the per capita consumption of water in India is set to increase substantially. As India becomes the most populous country in the world, it will also become the biggest consumer of water.

Household consumption of water is a smaller fraction of the overall. Only 49% of Indian household have access to formal water distribution network and piped water supply.


Indian utilities spend on water infrastructure has lagged. There is incomplete coverage. Poor infrastructure, older technologies and aging systems have led to ineffective management of water. Non-revenue water rate, due to theft or loss, stands at 41% in India compared with 21% in China. It is significantly higher than global average. This has led to the proliferation of informal water networks and costlier water supply options. 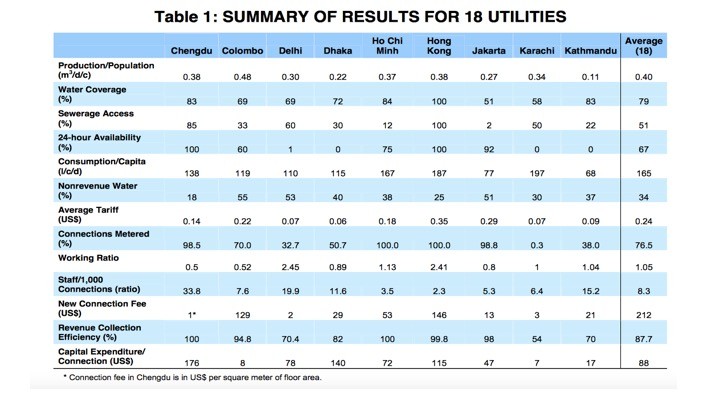 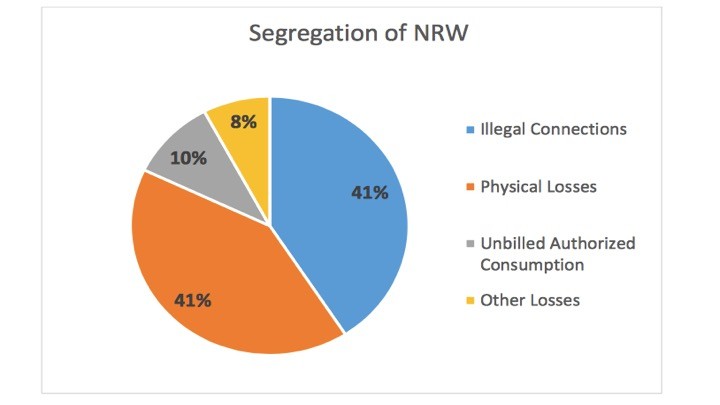 Asian Development Bank’s 2004 report estimated that Delhi had 53% non-revenue water. Ujjain Municipal Corporation, for example, estimates that 25% of its water supply gets lost during the distribution and transmission stages. Leakage and illegal connection account for most of these losses.