Smart Cities in China: A Short Visit to YinChuan 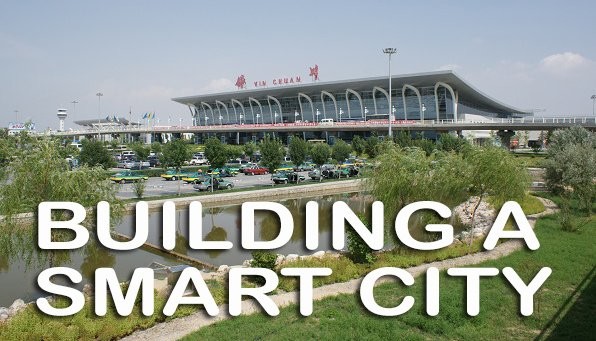 The invitation to attend a TM Forum Conference on Smart Cities in Yinchuan in Ningxia Hui Autonomous Region of China was not something I was going to skip. As an enthusiast and evangelist of Smart Cities across the world, I had heard about the $300 Billion that China had already spent on building these cities and putting all the infrastructure and technology. I was also told that these were ghost cities with hardly any people. I had read that the Chinese Government had invested all the money to keep people busy but most houses were empty and infrastructure was already showing signs of delay due to disuse. This was my chance to see this for real. It was also my chance to see a Smart City in action.

Yinchuan was one of these cities, redeveloped some 15-20 years back. With a population between 2 Million, this was one of the remote small cities to be redeveloped. It was the former capital of the Western Xia Empire of the Tanguts. Google maps showed the city below Mongolia – the wild-west frontiers of China – dominated by Muslim and Arab population. It was the beginning of the New Silk Route from China to the Arab world.

Through this BLOG, I will articulate my two days of extreme observation and contemplation about the situation there. I am an eternal optimist so please take my musings as a one sided observation. Yes – there is likely to be a sad, sorry, sordid, solemn side to this story as well. We will keep that for a different time. This is also not an article where I compare China to India. These are totally different places that do not even warrant a comparison – good or bad.

Coming into the City: The Airport


The first thing that catches your attention when you land in Yinchuan is the airport. A fairly modern airport, big enough for a small city, is already under massive expansion. The number of terminals and gates being added will treble its handling capacity. There were hardly any extra people on the ground tarmac – like we always find people hanging around planes like cleaners, baggage handlers, ramp-operators, catering staff etc. Either they were extremely efficient or somehow there were few workers. We were whisked away in a VIP Handling area directly from the airplane so there was an opportunity to see the airport on the tarmac side as well. On the baggage and city side, all parking entry and exits were automated and cars were RFID tagged so flow of traffic was seamless.


The next thing that catches your attention as you ride into town is the size, planning, and cleanliness of the roads in Yinchuan. The highway into town was 6 lane (3 on each side) and perfect greenery on the side and the fir trees in the divider for 20 kms. Cameras, RFID readers on each lane, smooth roads, on-ramps and off ramps clearly marked, and as we reached the new modern city of Yinchuan, we realized quickly that the stories of ghost cities were true to some extent. Tall residential building complexes, office buildings, gigantic buildings that can only be Government offices etc. all built and ready for occupation but had no occupants. 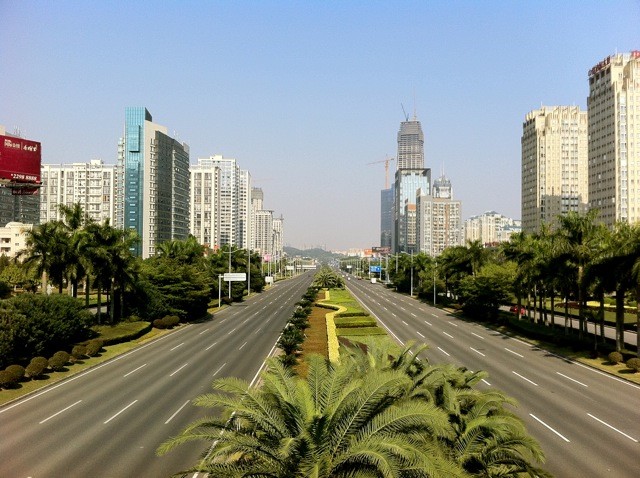 The concept of road planning and future proofing became evident, every minute. All roads were straight and cut each other at right angles; North to South, and East to West. Each major city road was 8 lane in the center, with a green divider and then a side road for two-wheelers and cycles and then a pavement for pedestrians – on each side. We were staying at the International Convention Center Hotel that was in the new part of Yinchuan. This area was all new construction buildings and with hardly any residents.
Beyond the pavement were lots of trees and extreme greenery. These carefully planted trees, shrubs, out-door sculptures, decorative lamps, lawns, walkways leading to narrow canals, that were not dirty and polluted with urban refuse, created a perfect camouflage to the tall apartment complexes and office complexes behind them or still being constructed. A lot of cohesive thought had gone into this and the execution was meticulous till the last finishing touch. There was no construction debris along any road.

On reaching the old town or the City Center as it was called, I saw the familiar China that I had seen in other small historic towns last year that had not been redeveloped. This part of town had narrower streets but still with a central road for cars and side roads for scooters and cycles. This was where you started seeing modern mixed-land-use concepts of pedestrian only streets like Europe with Shops on the side, road, cars and pedestrians sharing the flat surface without honking and pushing – each one was giving space to the other. This is the part of town that reflected the population of 2 Million that Yinchuan is supposed to have. It was busy but now crowded. Small local businesses thrived with street vendors and small eateries along the streets.


What was evident from seeing the tall buildings – largely unoccupied in the new part of town was that it was funded by State machinery and not done by private builders. As we moved into the older part of town, the buildings were more than 50% occupied and in the oldest parts of town it seemed full of people, as expected. The quality of construction of everything was really good even when it was Government buildings and Government owned residential quarters. There seemed to be houses of different sizes and amenities. The buildings were spread across the entire area interspersed between office complexes and shopping complexes. This mixed use area planning had been the cornerstone of Smart Compact Cities and area development concepts.


These shopping areas were interspersed with residential and office areas. For the size of the city, there were a few high-end malls and several shopping complexes that housed many stores. There were many small street shops on the lower levels of office buildings and outside the walls of the residential complexes. Having gone around 10 different large blocks, I could pretty much get everything I wanted within walking distance from each block. 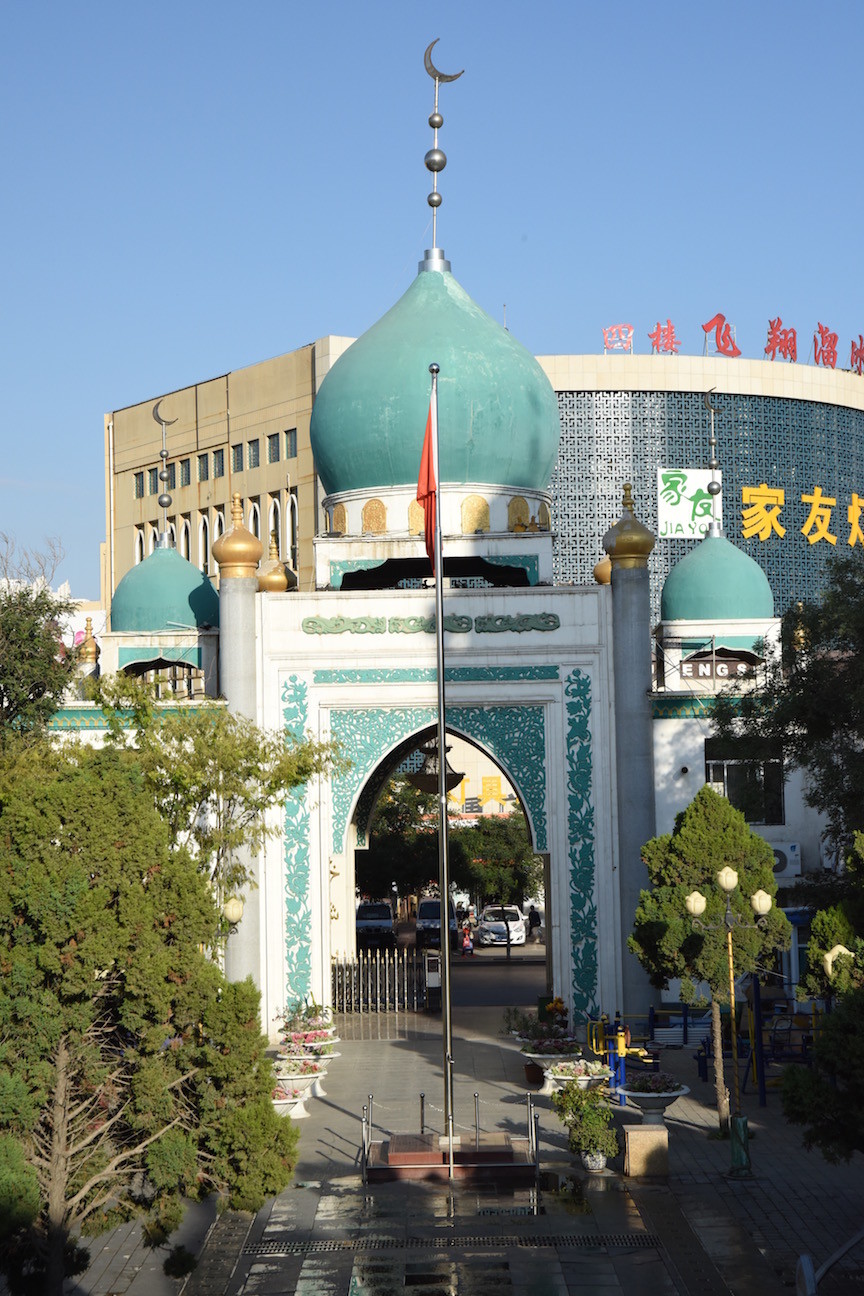 The planners had thought through how it was important to have shopping and offices close to residential areas so that it was convenient for people.In the two days, I did not see any massive schools or maybe I did not notice them since it was a weekend. However, I went past two small schools in the older part of town and both seemed to be local schools. What caught my attention was automated entry and RFID readers at the gates for recording entry and exit of children and school buses.

The large Muslim population of Yinchuan was evident by the number of large and small mosques in the city. And these too were built to scale. The designs were also largely locally influenced. The rest of the population was Buddhist and their temple pagodas were also visible from a distance. Bringing in places of worship inside the planning of town was a highly smart way of integrating city lifestyles with heritage and culture.